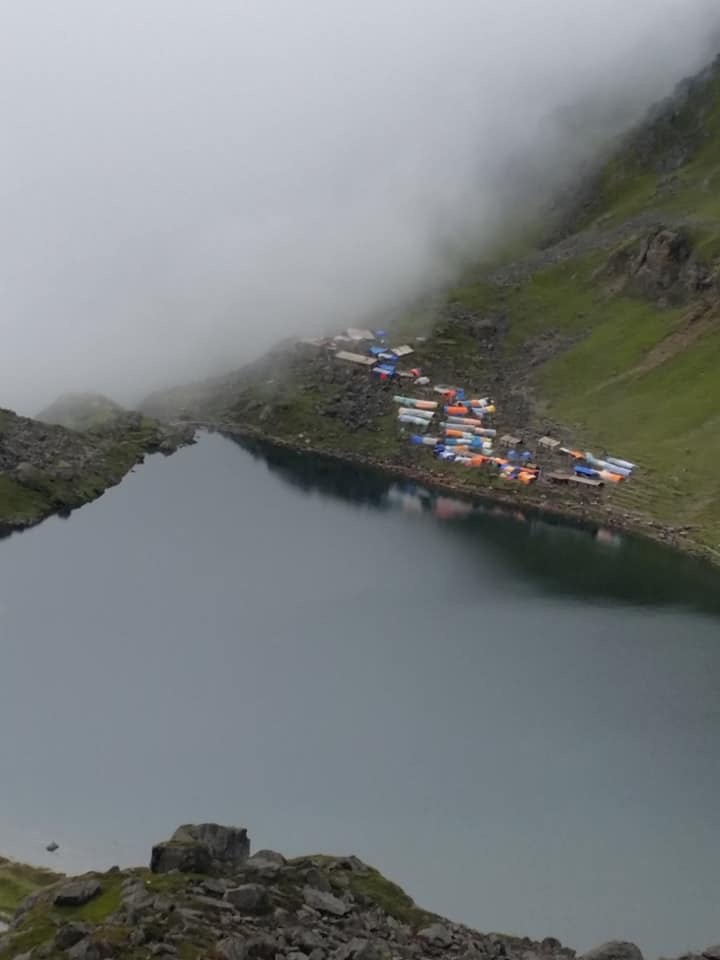 Legends said a long time ago; a large trident plunged at a mountain. Crystal clear water trickled from the same point. Lord Shiva, the mightiest Hindu deity, took just three sips when his throat was irritated with poison felt utter bliss. Gosainkunda Lake formed right after, the water flowing down to create a large pool of cerulean water.

Today, Gosainkunda is an alpine freshwater lake, located within the vicinity of Langtang National Park in Nepal. The lake sits at an impressive altitude of 4380m in the Rasuwa District (almost 50km away from Kathmandu). The magnificent lake spreads at an impressive 34 acres, with at least 108 smaller lakes around it.

Gosainkunda Lake gains fame not only for its exquisite physical appearance but its immensely high religious significance. The lake attracts thousands of Hindus around August every year for Janai Purnima (a widely celebrated Hindu festival).

Popular as a pilgrimage, even the lake's origin appears in Hindu scriptures of Bhagavata Purana, Vishnu Purana, and the epics Ramayana and Mahabharata. Additionally, Hindu mythology specifies Gosainkunda as the abode of the same mighty Shiva and goddess Parvati.

How to Reach There

The placement of the lake makes it ideal as a tourist destination. Gosainkunda Lake remains a part of many treks around the area, including Gosainkunda Lake Trek, Langtang Trek, and Dhunche-Helambu Trek. Out of the three, Dhunche-Helambu trek stands as the best comprehensive trek to embrace everything around the Langtang region. Usually, the trek to Gosainkunda begins with a drive from Kathmandu to Dhunche Bazaar (1970m). The trail goes up to Shin Gumba, an old Tibeto-Buddhist monastery at 3335m. The Dhunche-Helambu trek also features picturesque views of the Langtang range, the highest being Langtang Lirung at 7234m.

The best season to approach Gosainkunda is from April to June or September to December. Flora and fauna are livelier during these months, and the weather is moderately cold enough to walk 4-5 hours every day.

Langtang preserves mystical endangered species such as Himalayan Thar, Assam macaque, and red pandas. Some famous folklore also cites sighting of Yeti in the pine and rhododendron forests. The Lantang region is home to ethnic groups such as Tamang, Magar, and Gurung and houses Tibeto-Buddhists near the monasteries.

The treks surrounding Gosainkunda Lake are of moderate grading. Gosainkunda Lake Trek lasts explicitly only about eight days, while others may extend up to 18 days. These treks tend to get difficult in terms of acclimatization. Only gradual acclimatization assures trekkers do not experience altitude sickness. The graveled trails are suited for trekkers with at least a few trekking experience. Trekkers must be fairly fit in attempts to complete 5 hours of average walking.

The popular method of trekking in the region is Teahouse Trekking. These teahouses have food and lodging services. Additionally, they may also have access to warm water for baths. Trekkers are advised at least to seek knowledge about the area before heading out. In terms of grouping, due to it being in a fairly isolated area, a group of more than two people is suggested.

Bhagwat Simkhada 0 153 21 September 3.9 Tourist Attraction-Other
You Can Share It :
Other